Ruthenium anticancer complexes. Looking for possible targets and further insights into the mechanisms of action.

This year we have continued with research on versatile ruthenium compounds and several publications were successfully published.

Promising research on pyrithione complexes was continued within doctoral study of Jerneja Kladnik. Several novel pyrithione analogues were prepared and characterized, extensive biological tests were performed in the cooperation with dr. I. Romero-Canelón (University of Birmingham, UK) and the group of Prof. I. Ott (Technical university Braunschweig, Germany). The aim of the study was the fine-tuning of the anticancer activity through structural alterations of organoruthenium(II) complexes with pyrithiones.

Results were published in Chemistry – A European Journal: Towards Identification of Essential Structural Elements of Organoruthenium(II)-Pyrithionato Complexes for Anticancer Activity, https://doi.org/10.1002/chem.201903109

Further, two studies involved research on ruthenium complexes with 8-hydroxyquinolone (8-HQ) ligands. The first was performed in cooperation with our Slovenian colleagues from the Faculty of Pharmacy and Jožef Stefan institute (groups of Prof. S. Gobec and Prof. J. Kos). Eleven ruthenium compounds bearing either clinical agent nitroxoline, which was previously identified as potent selective reversible inhibitor of Cathepsin B (catB) activity, and its derivatives were prepared. We have demonstrated that organoruthenation is a viable strategy for obtaining highly effective and specific inhibitors of catB endo- and exopeptidase activity as shown by using enzyme kinetics and microscale thermophoresis. 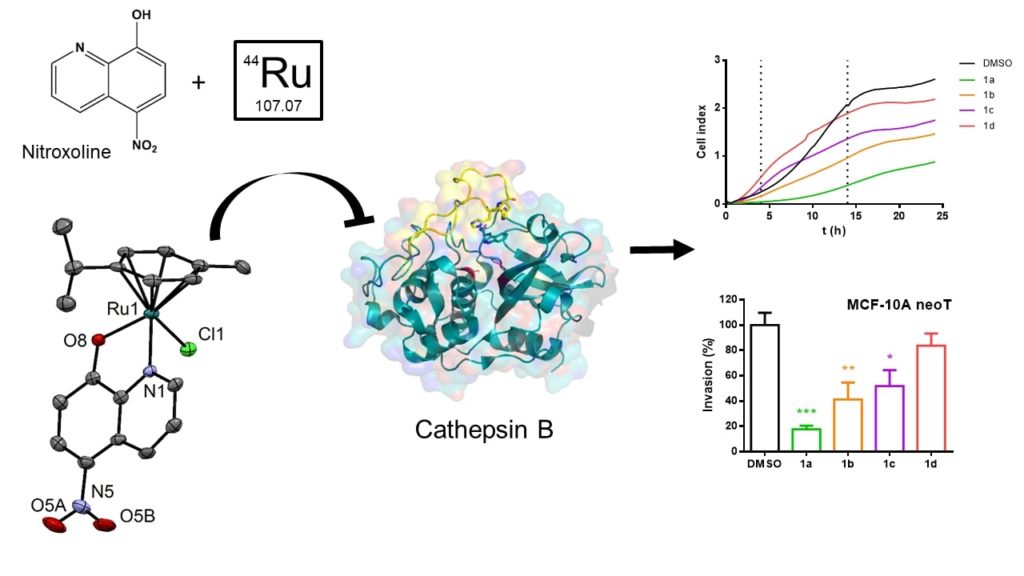 The second study with 8-HQ ligands was performed in the cooperation with colleagues from the National University of La Plata, Argentina (Ana L. Di Virgilio and Ignacio E. Leon). This was a comparative antitumor study of organoruthenium complexes with two selected 8-hydroxyquinolines (5-bromo and 5,7-dibromo substituted) on 2D and 3D cell models of bone, lung and breast cancer. In addition to both compounds potently inhibiting the cell invasion of multicellular spheroids, the monosubstituted compound exhibited also interesting antimetastatic action.

Results were published in Metallomics:

The next ligands with tradition in our group are b–dikenonates and in the newest study we joined the forces with the group of Jana Roithova (Radboud University, Nijmegen, Netherlands; previously Charles University, Prague). The knowledge on the interactions of metal-based drugs with biomolecules is extremely important but also difficult to study. In this paper the interactions of anticancer organoruthenium(II) complexes with biologically important sulfur containing molecules – cysteine, N-acetylcysteine and glutathione – were studied by mass spectrometry and infrared photodissociation spectroscopy.

Results were published in the Dalton Transactions:

Our research also involved sulfonamide ligands that are well known medicinal agents. It is not easy to find the targets of metal-based drugs but enzymes are always high on the list. We have found that organoruthenium(II) complexes of sulfonamide acetazolamide potently inhibit human carbonic anhydrase isoforms. This study was performed in the cooperation with Claudiu T. Supuran (University of Florence, Italy).

Results were published in the Journal of Enzyme Inhibition and Medicinal Chemistry:

A study involving ruthenium complexes from our library of compounds (with 8-hydroxyquinolone and b–-dikenonate ligands) was conducted in cooperation with the group of dr. Yangzhong Liu (University of Science and Technology of China, Hefei, China). The main aim was to establish the type of interactions between zinc finger protein NCp7 and selected ruthenium compounds. Proteins from this group are also explored as possible targets in the design of novel HIV drugs. Inhibitors of NCp7 frequently provoke the release of zinc from the protein. We found that the type of interaction is strongly dependent on the type of ligand bound to the metal center.

Results were published in Bioorganic chemistry:

← 150th anniversary of the periodic table of chemical elements. Periodic table, Mendeleev and philately. Metal based compounds as drugs against many diseases →